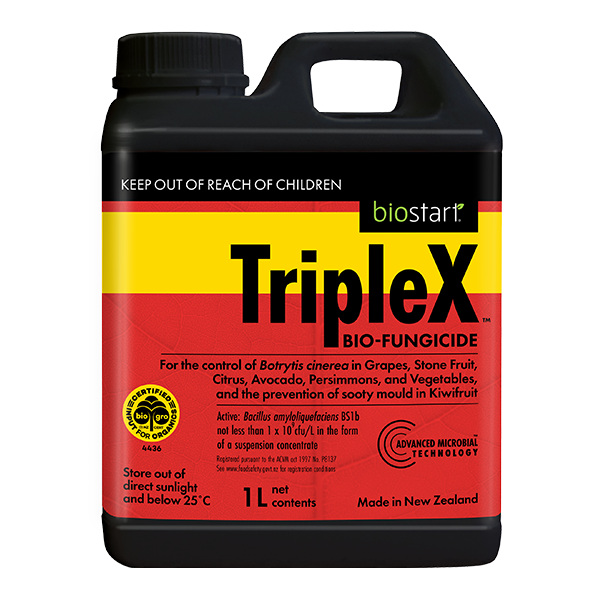 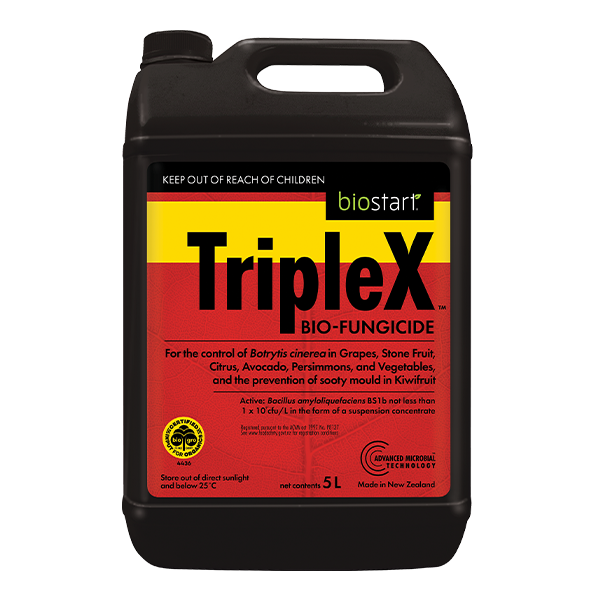 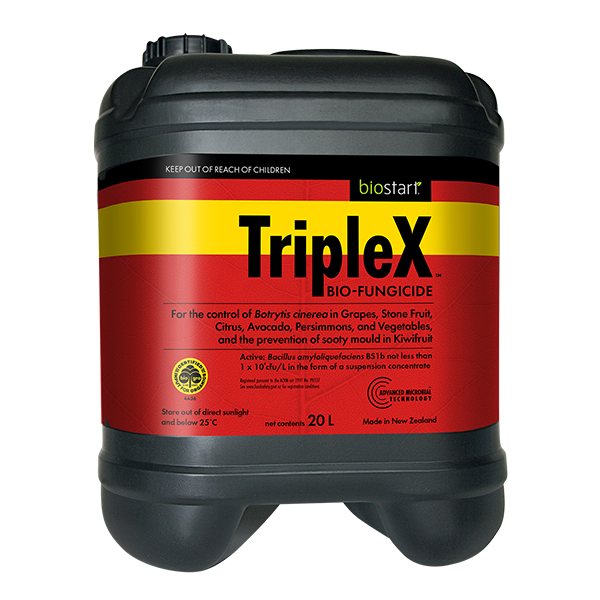 For our commercial pack sizes, large orders and volume discount pricing email us here, call 0800 116 229, or visit one of our retailers.

Fungal diseases can destroy a crop or reduce the fruit or vegetable’s marketability. Covering the foliage with protective microbes early in the season, enables plants to resist fungal diseases.

Like all biocontrol agents, use TripleX as a preventative for best results. Apply early so that the protective microbes have time to completely colonise the foliage, flowers and fruit areas where the disease-causing fungi like to grow.  In times of rapid plant growth or fruit development, re-apply TripleX to cover new plant surfaces.

Reduce the risk of fungicide resistance by using TripleX as part of an IPM strategy.

Key features of TripleX include:

TripleX is listed on the New Zealand Winegrowers Spray Schedule and the Zespri Crop Protection Standard.

If your crop isn’t included above, please contact your local BioStart representative for personalised information.

INVERT CONTAINER AND SHAKE WELL. This product contains living microbes. Prior to use, the spray tank must be thoroughly cleaned to remove any chemical residues that could be toxic to the Bs1b microbe. Sanitise spray tank before application to remove any contaminating microbes. Partially fill the spray tank with clean water and start agitation. Maintain a spray solution pH between 5.0 and 7.5 or efficacy may be affected. Add the required amount of TripleX to the tank. Rinse measuring vessel with water and add to the tank. Complete filling. Use a slow agitation rate to mix. Maintain agitation during use and do not leave the spray mixture standing. Apply diluted product within 8 hours of mixing. Maximum spray pressure 20 bar or 300 psi.

When mixing or applying, avoid contact with skin and eyes. Wear protective clothing, gloves and goggles. Flush applicator thoroughly with water after use. Do not eat or drink while using. Wash hands and face before meals and after work. Wash protective clothing after use.

Store below 25°C. Keep out of reach of children. Keep container tightly closed. Do not store diluted product.