Pasture hay is usually made in early summer from the excess feed on livestock farms, whereas other types of hay are made from crops such as cereal, canola or lucerne.

The aim of good haymaking is to preserve the maximum feed quality of the forage and to prevent overheating in the bales which can lead to a fire in the hay barn. To achieve this, it is important to bale hay at the correct moisture content at baling. A further aim is to minimise the growth of moulds that produce myctoxins harmful to animals, as well as yeasts which are responsible for heating of hay bales.

It is therefore important to bale hay at the right moisture and take into consideration potential problems such as “difficult to dry” thick stems in canola crops, developing seed heads in cereal crops.

The heating of hay bales after baling is caused by the metabolic activity of yeast and fungi.

When moulds grow on hay they consume carbohydrates and proteins in the hay which reduces its nutritional value. In addition, many moulds produce toxins that are harmful to the animals as well as making it unpalatable to stock making it unlikely they will eat it. A recommended safe level of mould is < 100,000 cfu/g of hay.

The growth of yeasts on hay uses up valuable carbohydrates as well and leads to the production of CO2 as well as water. This production of water leads to more yeast growth and eventually generates the heat that starts hay fires.  A recommended safe level of yeasts is < 300,000 cfu/g of hay.

Use of Hay Preservatives

moisture hays. The activity of these preservative allows farmers to bale hay at slightly higher moisture content and yet maintain hay quality and reduce the risk of hay fires.

Using a hay preservative such as HayKing improves the preservation of the hay. HayKing works by inhibiting the growth of the naturally occurring, spoilage microbes that are present on the forage in the paddock prior to baling.  Hay quality is improved by inhibiting these microbes from growing and using up precious nutrients in the hay crop.

HayKing was applied at baling to pasture hay that was baled at 20.5 % moisture content and some untreated bales were used as a control. 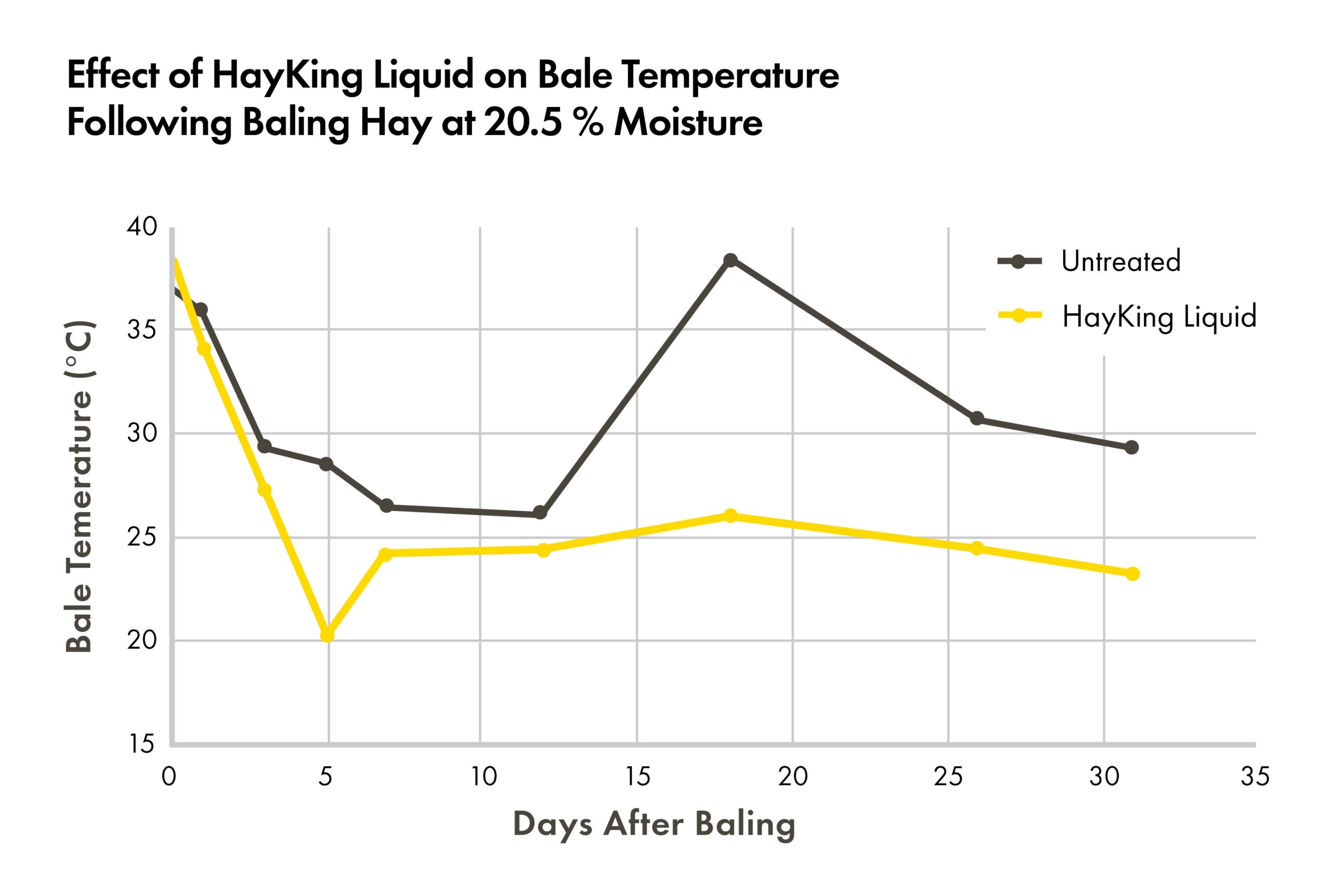 The graph above shows that the application of HayKing to hay at baling stopped the bales heating over the trial period, whereas the untreated bales heated up 2 weeks after baling and remained warmer than treated bales for ~14 days. The heating in the untreated bales was caused by the activity of the yeasts in the bale. These yeasts use up sugars in the hay to grow and produce heat when they metabolise these sugars.  Once these sugars are used up by the yeasts, they are not available to feed the animal.

These results indicate that hay treated with HayKing reduces losses in ME and digestibility. This means farmers can feed more cows per tonne of hay.

Check out our range of products dedicated to silage and hay: