Meet your soil microbes – Mycorrhizal fungi, other fungi and bacteria

An overview of the classes of soil microbes and their role in supporting healthy plants. 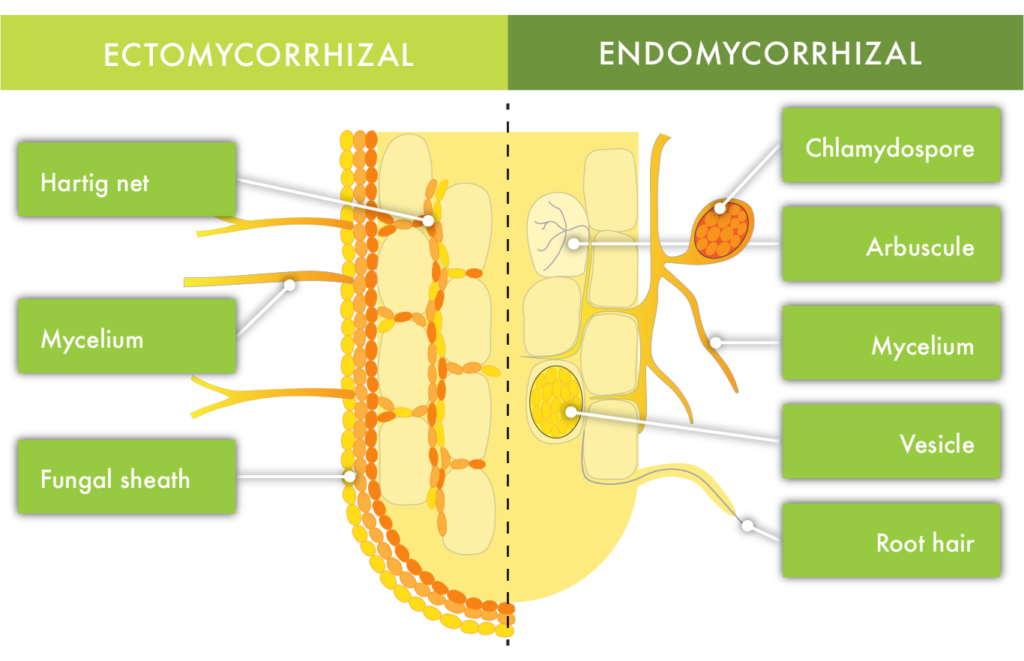 Mycorrhizal fungi are a special group of fungi. In a beneficial exchange, plants provide mycorrhizal fungi with carbohydrates and the fungi provides nutrients such as phosphorous and zinc to the plant.

The most common type of endomycorrhizae are the arbuscular mycorrhizal fungi (AMF) and you can buy spores for these fungi as soil amendments.

In New Zealand, where organic matter levels are generally >4–5%, spores for AMF can be found in the soil. Once the spores germinate they penetrate into the root, forming an “arbuscule” which is the structure used by the fungi for nutrient exchange with plants.

When AMF plug into plants they change the exudates produced by the plant roots to alter the nutrient uptake. AMF mycelia act like a secondary root structure allowing the plant to mine a bigger volume of soil to obtain more nutrients.

These mycelia also assist in giving the plant resilience to drought as the plant can also scavenge a larger volume of soil for water. In water-logged soils, these mycelia buffer the plant against the excess water.

Soil fungi are an important part of the soil microbial ecosystem. Fungi are aerobic organisms (they need air to survive) and therefore perform best in well-aerated soils. Fungi are not able to make nitrogen and are therefore dependent on soil bacteria or plants to provide this nutrient for them.

There are a wide range of fungal species found living inside plants (endophytes). A well-known example is the Neotyphodium species of fungi that can grow in perennial ryegrass and tall fescue (e.g. AR1 and AR37 endophytes). These fungi are able to protect these grasses from insect attacks and assist in protecting the grass from environmental stress.

Some soil fungi produce enzymes that break down lignified plant cell walls that are found in woody organic matter such as prunings, old roots and dead leaves from horticultural crops such as apples and grapes. These fungi break down this low carbon to nitrogen organic matter into humus.

Some fungi, including Phytophthera, Armiallaria and Rhizoctonia are pathogens. When conditions favour them, these fungi attack plant roots. Interestingly, if the soil microbiology is in balance then other microbes can suppress the activity of these disease-causing fungi. This is referred to as having “disease suppressive soils”. In this case “good fungi” (and bacteria) compete with the disease-causing fungi for resources in the soil or in some cases, produce compounds that slow the growth of the disease-causing fungi. Just like bacteria living in the rhizosphere, fungi living around the plant roots can stimulate Induced-Systemic Resistance (ISR) in plants to help resist disease.

The most important direct effect of soil bacteria for plant growth is providing anionic plant nutrients. Soil bacteria make nitrogen (N), phosphorous (P) and sulphur (S) available for plants. N, P and S fertilisers are “locked up” by the soil in chemical forms that are stable in the soil soon after application but are not available to the plant until bacterial “mineralisation activity” takes place.

Some soil bacteria have evolved to produce plant rooting hormones which cause the plant to grow more roots, supporting plant and other microbial populations to develop.

Soil microbes can also act as a biocontrol agent. In diseased soil the balance between bacteria and fungal numbers needs to be restored – increasing good bacteria can compete with disease-causing microbes to recreate balance.

The presence of some bacteria and the exudates they produce in the rhizosphere stimulates the plants’ defence system called ISR (induced-systemic resistance). When the ISR is activated, the plant is more resilient against attacks from pathogens.

Some bacteria (actinomycetes) even produce antibiotics that kill off other microbes. Yet other bacteria are good at breaking down green organic matter with low carbon:nitrogen ratios (e.g. lawn clippings) into humus.

Check out our range of products dedicated to soil health: